PFF@MCA within the Programme of the 12th Philosophical Film Festival

Luis Buñuel, Salvador Dali, and Federico Garcia Lorca — young and bright, intelligent and cheerful. They had a project to modernize the country—a vision for change that was always accompanied by smiles, jokes, and ingenuity. But they also suffered the tragedy of the war that marked them and their entire generation. Some were killed, such as Lorca. Others were forced into exile, such as Buñuel. And some, like Dali, had to reinvent through a caricature, sometimes brilliant, sometimes shameful, in order to survive. 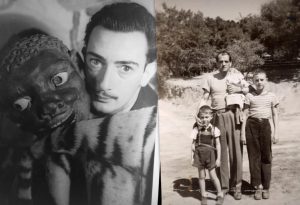 In 1967, Aguilar Publishing asked Max Aub to write a biography of a colleague of the Mexican generation and exile: film director Luis Buñuel. When Aub died on July 22, 1972, he left 5,000 typed pages on his desk, the result of an unfinished project that surpassed the typical biography and reflected the synthesis of a generation of Spanish artists whose lives were marked by three wars and more than 30 years of persecution. years. This heterogeneous set of materials reflected Aub’s modern conception of the narrative genre: a character constructed from a mosaic of different visions and diverse materials.

The documentary by Albert Montón and Javier Espada tells the story of Aub’s unfinished biography, dedicated not only to Buñuel, but to the entire ’27 Generation, with the golden trio Buñuel-Lorca-Dali as a pillar of 20th century Spanish culture.