The 10. anniversary hybrid edition of the Philosophical Film Festival is dedicated to our beloved professor, member of the Organizational board of the Festival until last year and a friend of the Festival from its beginnings, Prof. Stefan Sidovski. The man who is at the source of thе synergy between philosophy and film in Macedonia and whose work we believe will inspire other young authors in the future, both from the areas of philosophy and film, to continue on his footsteps and keep on building the bridges between film and philosophy. The professor was acknowledged as a “Master of Amateur Film-making” by the Macedonian Cinema Association and was the first one to explore academically the area of film-philosophy in Macedonia, through his MA thesis “Film frame and its aesthetic essence” and his doctoral thesis on “Aesthetics and Dialectics in the editing of film”. He was both, a professor of film (History & Theory of Film) and philosophy.

This year, besides the special screening of FACE in the framework of our Spring Online Migrations (this film, as well as other films by Prof. Sidovski could be found on this YouTube channel: https://tinyurl.com/y9uqk2ct), his first professional film, the Festival for the first time inaugurated the Special Mention “Stefan Sidovski – Sido” in the Official Selection of Short Films. Тhе first winner this year is the German director Sophie Linnenbaum and her short film PINKY PROMISE (Das Mensch). Sophie will receive the plaque “Stefan Sidovski – Sido”, created on the basis of a photograph by the Macedonian photographer Sasho N. Alushevski. In addition to this, on the initiative of the Macedonian artist Sonja Chingarova Foteva, a student of the first generation of the professor, the director will receive the painting “A Labyrinth in a field of black poppies 2” (2019, 70×70 cm) from the exhibition Mandala Milci. Foteva will offer as a gift to the winning director one of her paintings every year for the Special Mention for Short Film of the Festival. Something more about the exhibition could be found on the following link: https://tinyurl.com/yaz65ju8

SOPHIE LINNENBAUM was born in Nuremberg and has a Diploma in Psychology. Her short films are screened on national and international Festivals, like the awarded [OUT OF FRA]ME or DUOLOGUE which had it’s Premiere at the Berlinale and went to Cannes 2017. Her Shortfilm PIX was awarded with the German Short Film Award 2017. She studies directing at Film University Babelsberg. 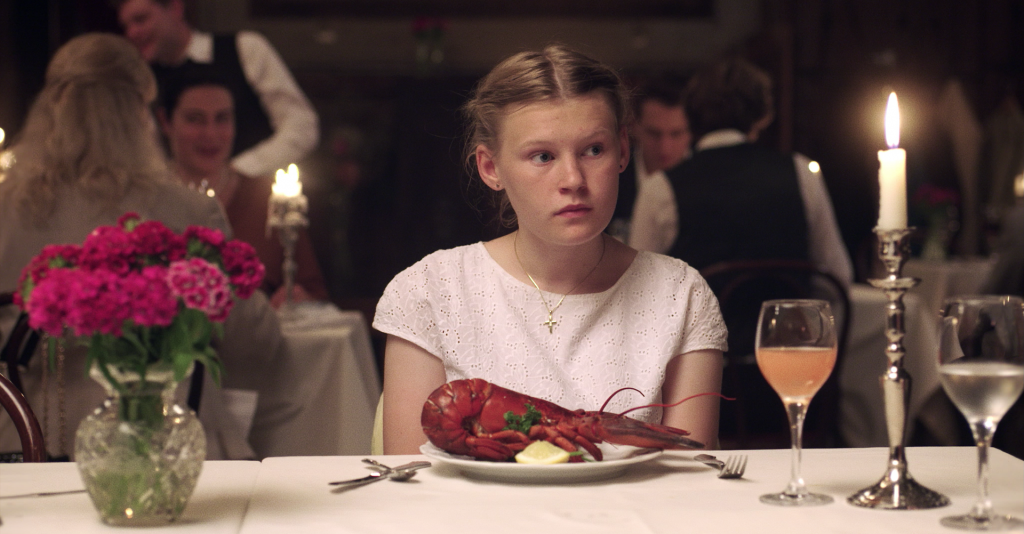 It’s never wrong to do the right thing. Is it?

Lobsters, cakes and broken promises. Sara and her parents are celebrating in a restaurant. Not wanting to eat the lobster on her plate, Sara hides it beneath the table. But every action has its consequences, so when her father finds out, the bill could be quite horrible and bizzare. A relentless satire blurring the fine line between the right and the wrong (and how they can be true at the same time), as well as about the paradoxicality of moral rigidity.

“PINKY PROMISE subverts the upper class lethargy with a playful deconstruction of the tyranny of social contracts. Discursively confronting political fundamentals, it moves skillfully between the comical register and a much-needed reflection on personal and collective responsibility. Reducing principles to an absurd grandstanding, the film reveals the ritual of an intergenerational initiation into the status quo. Delivered with an entertaining intensity, this serves as a reminder for a need to rise to the challenge and denounce historical inertia for a critical reimagining of the present.”