Program: “WHAT IF THE WORLD WAS TRANSPARENT?

– A SIMPLE GUIDE FOR SPREADING PHILOSOPHICAL WONDER IN THE CLASSROOM”

Intro: Philosophy for Children and the experience of introducing it in Denmark

A more theoretical introductory lecture in P4C and sharing the experience of introducing the practice of philosophy with children in Denmark.

Special Guest in the Educational Programme:

David M. Larsson is a philosophical counselor and practitioner based in Denmark. He earned his MA in Philosophy and Japanese at the Center for Subjectivity Research, University of Copenhagen, where he specialized in phenomenology, philosophy of mind, and Zen Buddhist philosophy. David currently runs a philosophical counseling practice from which he offers counselling to groups and individuals. He also conducts sessions for children in the nonprofit organization Rum for Undren [“Room for Wonder”], which aims to promote Socratic Wonder and critical thinking in schools and kindergartens across Denmark.

For reading an interview with Mr. Larsson, click here. For watching a video of the introductory lecture, click here.

An introductory workshop for the practice of philosophy with children in Macedonia for young researchers, students, teachers and other educational stuff interested in developing critical thought in children from the youngest age.

Four classes with children from a local English-speaking school to demonstrate the method. 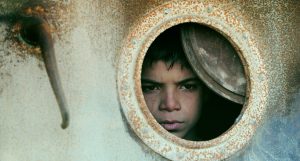 An encounter with philosophy through film for the youngest, first of this kind in Macedonia. The moderator, Martin Popovski (PhD in Philosophy) will apply some of the techniques in an experimental film-philosophy class with children from a local school, after watching a film together.

Cinematheque of Macedonia, free projection for children and parents

Projection of a film for children (+10)

BORDERLESS by Iranian film director Amirhossein Asgari is a story in which the protagonists are two children meeting on a no man’s land, between two nameless countries waging a war with each other. They learn to live and help each other amidst the chaos of war, making a little shelter on the rusty ship they turn into their home…